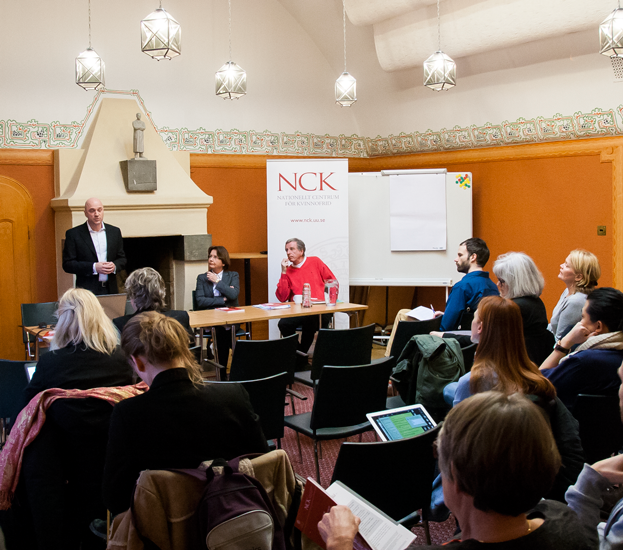 Scientifically based knowledge is important for improving the support provided to women subjected to violence as well as to their relatives. Hence, research and development are important parts of NCK's work.

NCK’s commission includes monitoring and analysing research and experience based knowledge, detecting any knowledge gaps in the field. This involves collecting and processing knowledge and experiences gained by professionals who, in their work, meet people subjected to violence. The NCK report series and online knowledge bank are means by which this knowledge can be effectively disseminated. Research and development at NCK is carried out in close collaboration with the clinical department with the aim to develop new scientifically based methods for the treatment and care of women subjected to violence. 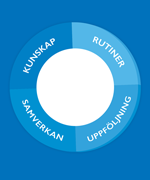 Since the early 1990s, NCK and the County Council of Uppsala have worked systematically to improve the care for women subjected to violence and to increase an early detection of exposure to violence. The work and findings are presented in a report called the Uppsala Model.

Four elements have been identified as key for improving the reception and care for women subjected to violence; knowledge, routines, follow-ups and collaboration.
About the Uppsala Model

National programme for the care of victims of sex crimes

In February 2008 NCK presented a handbook to support healthcare professionals in their treatment of victims of sex crimes. This handbook was commissioned by the government and is a part of a national programme within the Swedish healthcare system. Included in the handbook is a guide with practical instructions, including how to take samples and secure evidence.
About the national programme for the care of victims of sex crimes

In 2006 the government commissioned NCK to set up and run a national support line for women subjected to violence and those close to them. This service was developed during 2007, and the telephone line was opened on the 4th December 2007. The helpline has been named Kvinnofridslinjen. It is run in conjunction with NCK's clinical unit at Uppsala University Hospital.
About the construction of Kvinnofridslinjen

The dissertation explores experiences of violence amongst pregnant women and their attitudes towards being questioned about violence at the antenatal clinic.
About the dissertation "Men's Violence Against Women – a Challenge in Antenatal Care"

"Captured Queen" is the first investigation into the prevalence of men's violence against women to be carried out in Sweden. It shows that many women in Sweden have experienced being subjected to violence.

In total 28 percent of the women had experienced physical violence at the hands of a previous husband or partner. More than one fifth of the young women, between the ages of 18 and 24, had been subjected to violence during the last year.
About the investigation "Captured Queen"