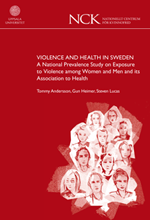 The National Centre for Knowledge on Men’s Violence Against Women (NCK) has in a national study in Sweden asked 10,000 women and 10,000 men between the ages of 18 and 74 about their exposure to sexual, physical and psychological violence, both in childhood and in adulthood. The study also includes questions regarding health and life circumstances.

– Violence is a widespread and serious social problem. To be able to provide better support to those subjected to violence, and to prevent it, we need to know more about the actual situation, says Tommy Andersson, senior lecturer and research director of the study.

The report "Violence and Health in Sweden – A National Prevalence Study on Exposure to Violence among Women and Men and its Association to Health" gathers the first results within the scope of this research project. The report was published in 2014 with the original title: ”Våld och hälsa – en befolkningsundersökning om kvinnors och mäns våldsutsatthet samt kopplingen till hälsa”.

The answers in the study indicate that violence is common. Women reported exposure to severe sexual and psychological violence to a much greater extent than men, while men reported a somewhat greater level of exposure to severe physical violence. The data also showed that women were much more likely to be subjected to violence by their partners, while men were more often subjected to violence by a person unknown to them.

Some of the results presented in the report

Approximately 20 percent of women and 5 percent of men had, at some time during their life, been subjected to severe sexual violence.

Slightly more than one in ten women and one in a hundred men reported experience of severe sexual violence after the age of 18.

14 percent of women and 5 percent of men had, as adults, been subjected to violence or threats of violence by a current or former partner.

20 percent of women and 8 percent of men had, during some period in their adult life, lived with exposure to repeated and systematic psychological violence exerted by a current or former partner.

The analyses demonstrate that psychological and physical ill-health are more common, sometimes several-fold more common, in individuals who have been subjected to severe violence.

Among both women and men who had been subjected to severe sexual abuse as children or adults, symptoms of PTSD were approximately three to five times more common as for others.

Symptoms of physical ill-health such as headaches, pain in the shoulders or neck, vertigo or recurring intestinal problems are more common in individuals who have been subjected to severe sexual violence.

"Violence and health in Sweden" (pdf)
To order the report in print format, please contact NCK at info@nck.uu.se.